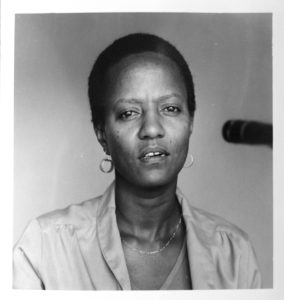 This collection of photographs, pamphlets, educational material, newspapers and other documents was assembled by Chris Searle during his involvement in the Grenadian Revolution 1979-83. The originals are currently held in the Black Cultural Archives in Brixton, South London.

It is dedicated to the memory of Jacqueline Creft, one of the leaders of the New Jewel Movement and Minister of Education in the People’s Revolutionary Government from 1980 to 1983.

“The construction of mass education in Free Grenada”,
by Minister of Education Jacqueline Creft at the First International Conference of Solidarity with Grenada in November 1981

Comrades, ever since our party was founded in March 1973, high upon our list of priorities has been the transformation of this twisted education system that we inherited from colonialism and from Gairy.

We were determined to change a system which so powerfully excluded the interests of the mass of our people, and which also wove webs of fear, alienation and irrelevance around our children’s minds … whether it was Little Miss Muffet, the Cow That Jumped Over the Moon, William the Conqueror, Wordsworth’s Daffodils, or the so-called “Discoveries” By Christopher Columbus of the “New World”.

The lucky few of us who went to secondary school, learned about Cromwell’s Revolt but not about that of Fedon. We learned about the reforms of Wilberforce yet nothing of Marryshow. They made us read Shakespeare and Jane Austen, but kept silence about George Lamming.

Right from the beginning of our struggle we called for an education system which not only services all our people, secondary schools which would freely open the doors to all our people without the constraint of fees, but also a curriculum which would eliminate absurdity from our classrooms and focus our children’s minds upon their own island, their own wealth, soil and crops, their own solution to the problems that surround them. For too long we had been brainwashed to think that only Europe and America held the answer.